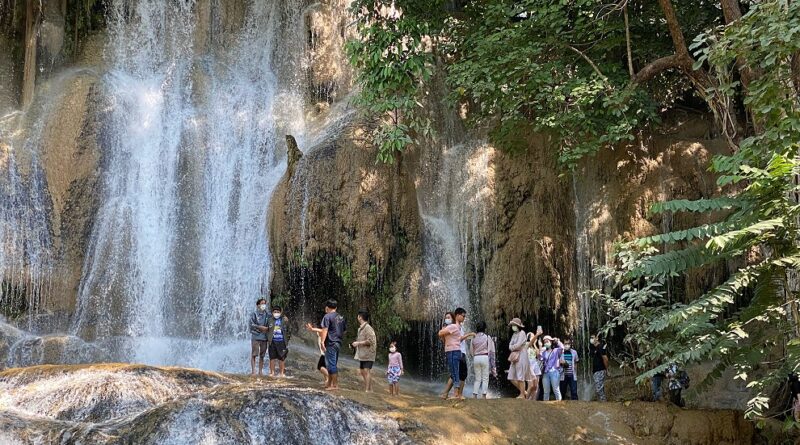 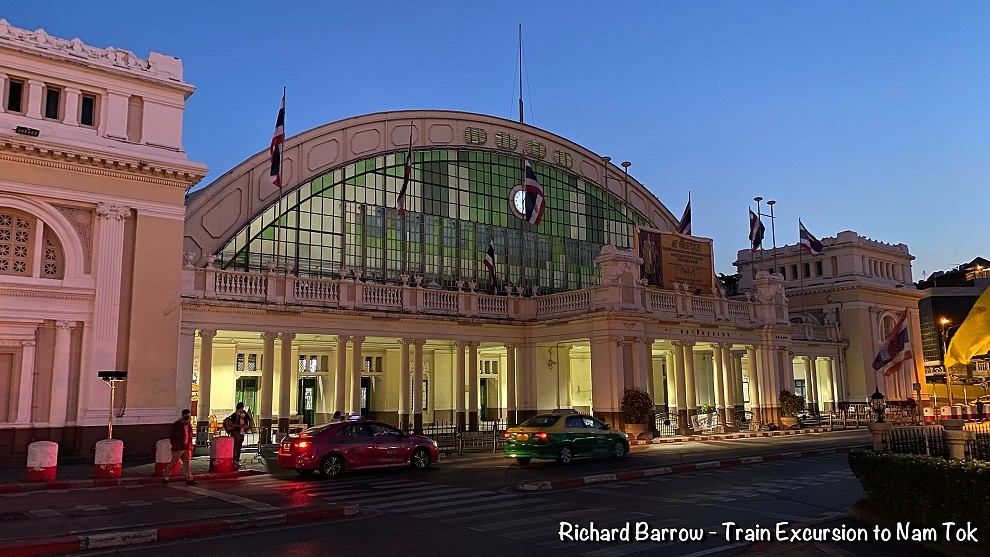 Good morning from Bangkok Railway Station. Today I’m taking the excursion train to Nam Tok in Kanchanaburi. There will be a couple of stops along the way before we get to the waterfall. 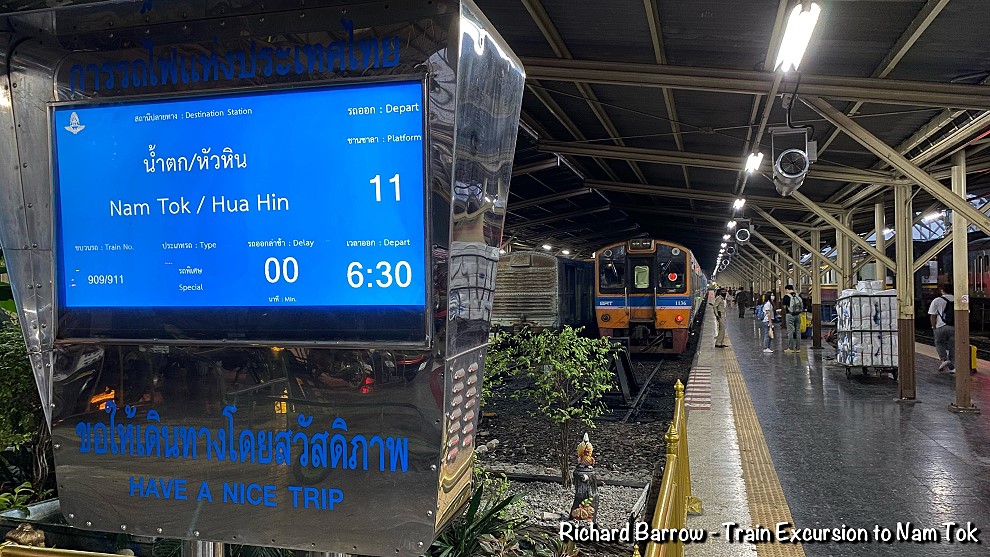 When you get on the Nam Tok excursion train, it’s important that you get in the right carriage. This is because the train also has carriages for the excursion to Hua Hin. At the junction, the train will split. We will go west and the other half will go south. 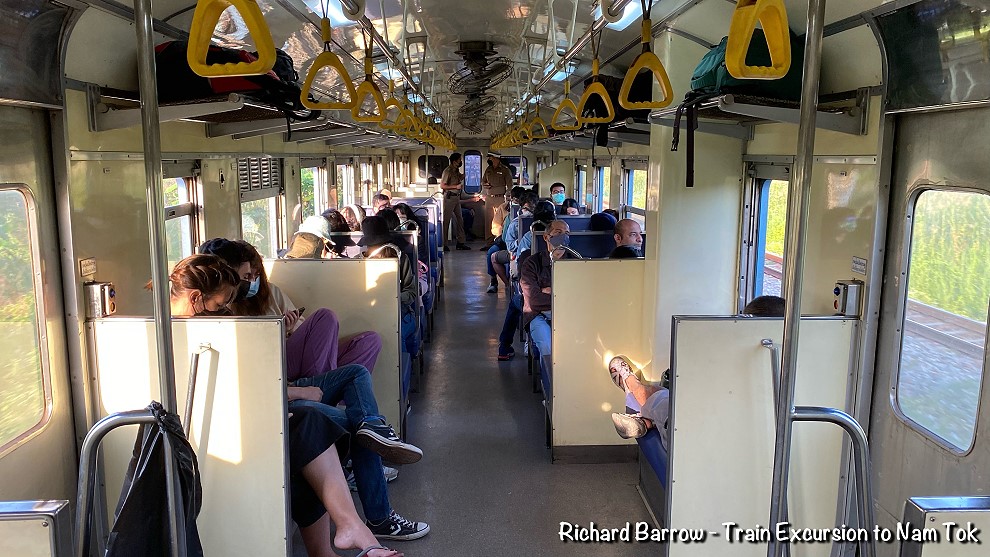 Tickets for the day-long excursion train to Nam Tok are only 120 Baht for 3rd Class carriages with fan. The train runs only at the weekend and public holidays. There’s a couple of stops along the way. 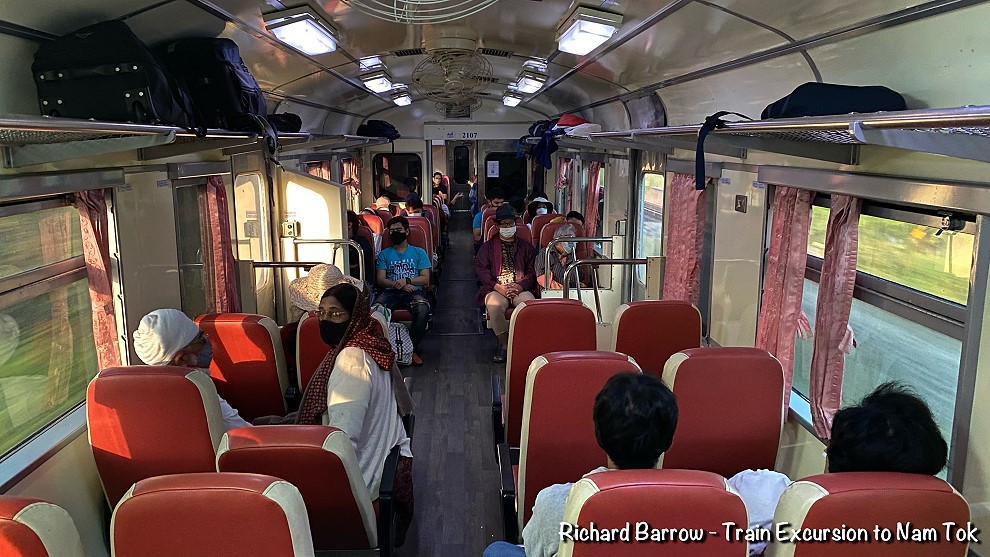 If you want air-conditioning, it is 240 Baht for 2nd Class. But you cannot open the windows to take pictures. 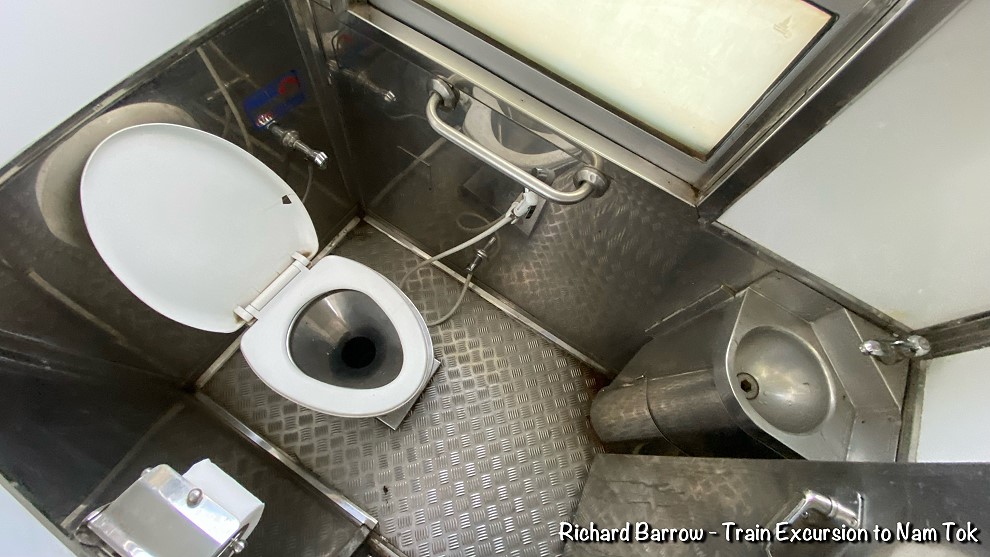 These are the toilets on our train. They all seem to be Western style toilets with seats. Quite often, 3rd Class carriages will only have squat toilets. These are not easy at the best of times, but on a moving train they must be nearly impossible to use. 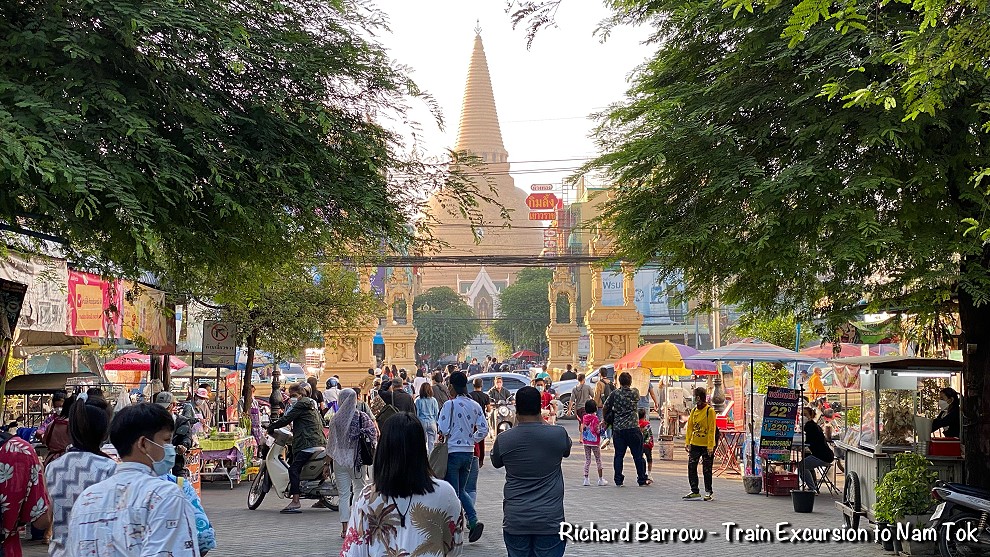 Our first stop on the day excursion train from Bangkok to Kanchanaburi is in Nakhon Pathom. The highlight is the giant stupa which is the biggest in Thailand. The top of its spire reaches 120.45 meters, with the base circumference of 235.50 meters. 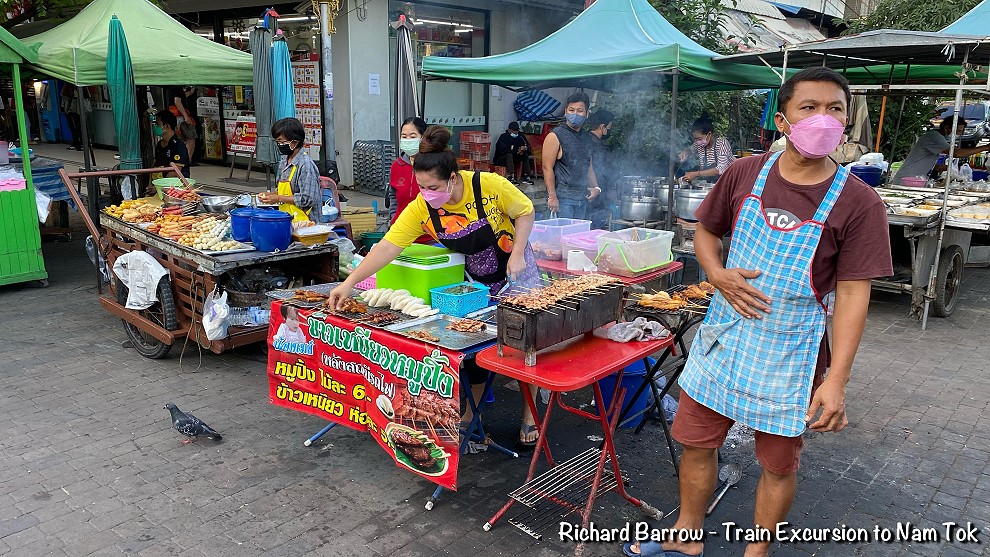 As it is an excursion train, they wait for you at the station. They gave us 30 minutes which was just enough time to walk to the chedi and to buy some breakfast in the market. I had Moo Ping with sticky rice. The train left promptly at 8:20am, 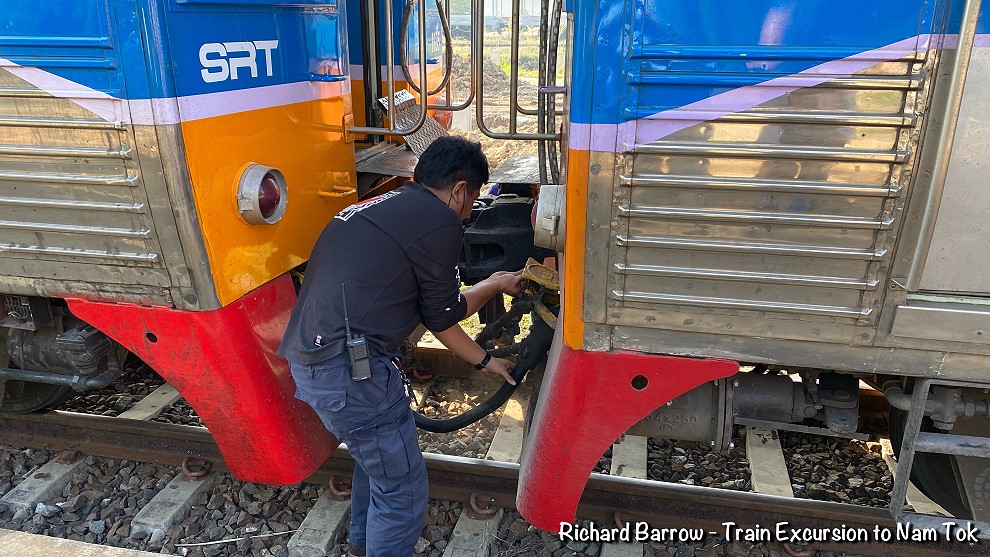 As we approached Nong Pla Duk Junction, the engineers prepared to split the train as we would be going separate ways. The front half, where we are, will go to Nam Tok in the west. The back half will go to Hua Hin in the south. 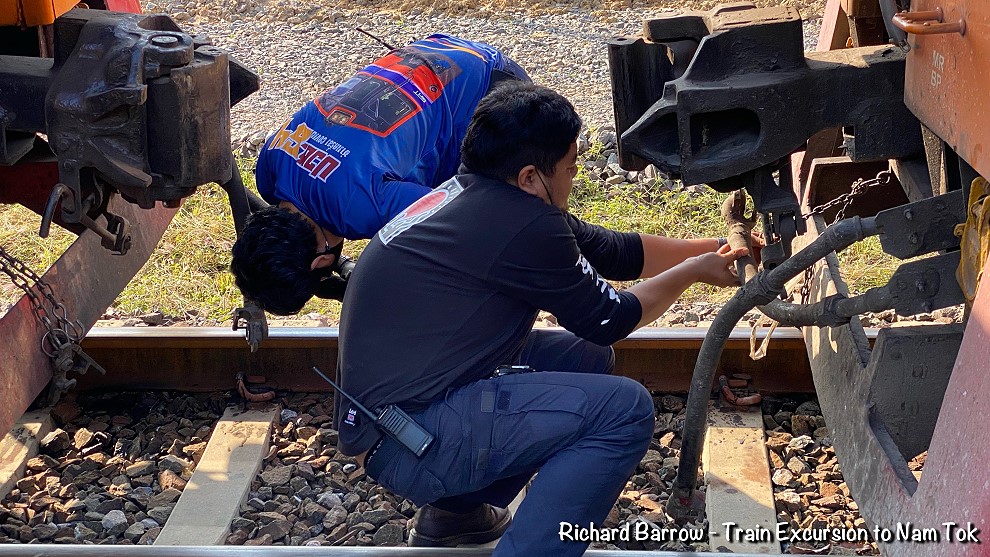 The uncoupling of the train literally at Nong Pla Duk Junction literally took them less than two minutes. On our return this evening, we will be coupled back together at this station for the last keg back to Bangkok. 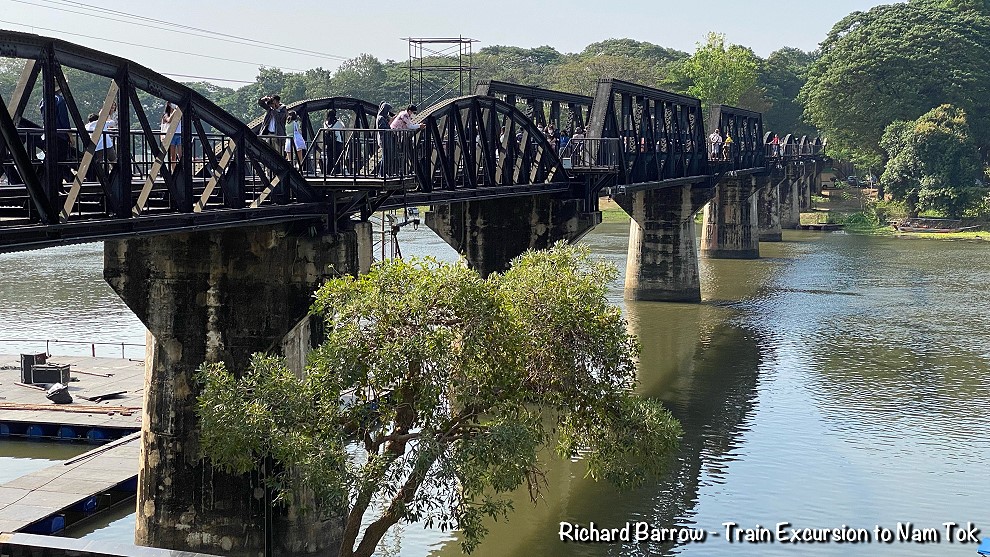 The second stop on the excursion train trip to Nam Tok was at the Bridge on the River Kwai Bridge. They gave us 25 minutes here. This was made famous by the movie of the same name. Though, they didn’t actually shoot it here and this isn’t a wooden bridge. 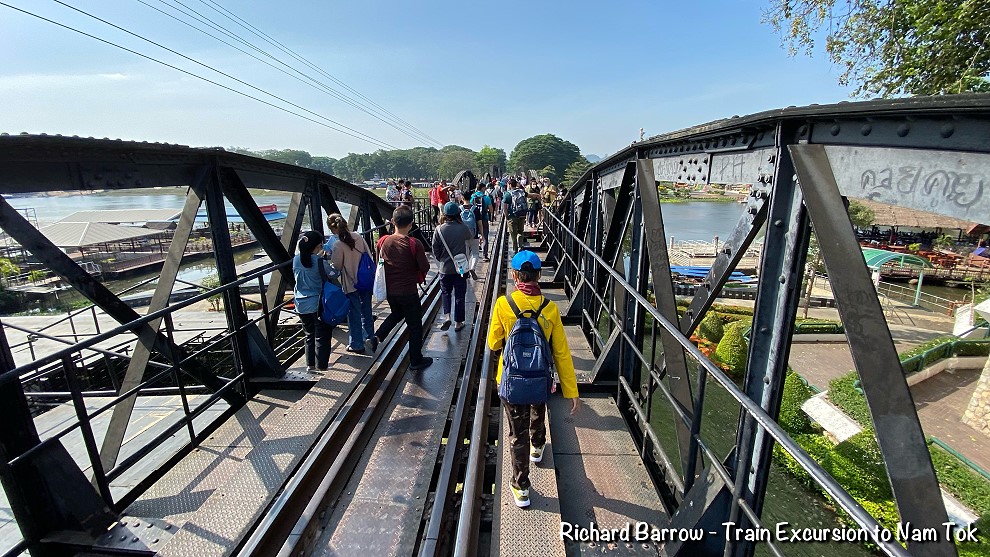 You can take boat trips from the River Kwai Bridge which I will try and do the next time I’m here. The boat is only 800 Baht for 90 minutes and it has several stops. It’s worth spending at least two nights and three days here. I’ve been here many times. 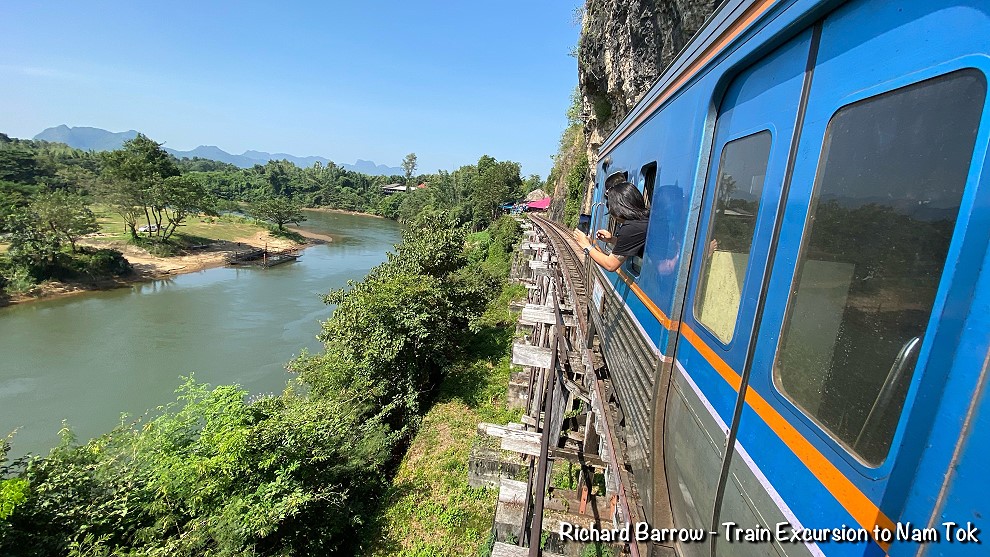 The most scenic part of the railway in Kanchanaburi is when it goes along the river near Saphan Tham Krause station in Sai Yok. I’ve done this a few times. But to be honest, the best views are while you are on the trestle bridge watching the train pass. 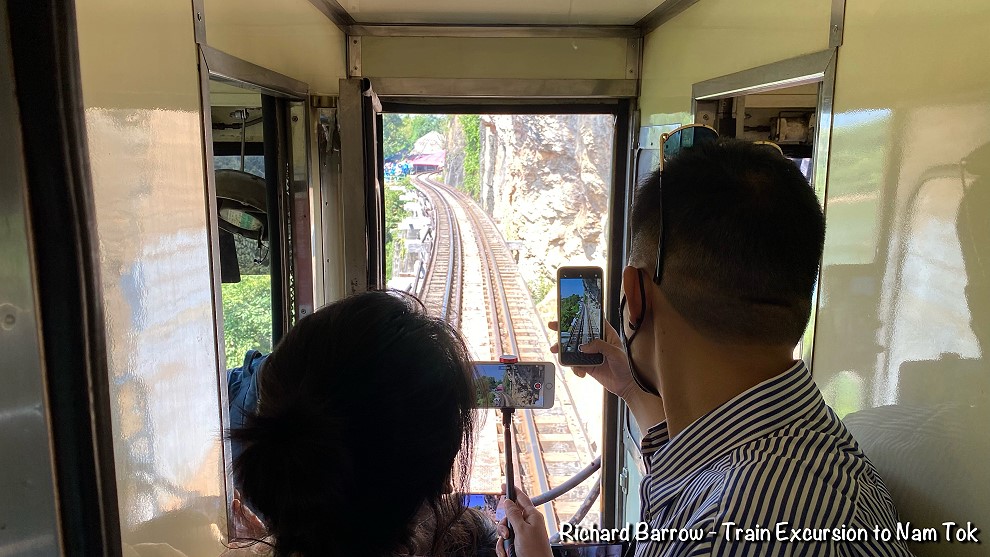 The best pictures are from the left hand side of the train. Make sure you sit in 3rd Class as the windows on 2nd Class don’t open and are tinted. They also open the front of the train so you can see the view that direction. 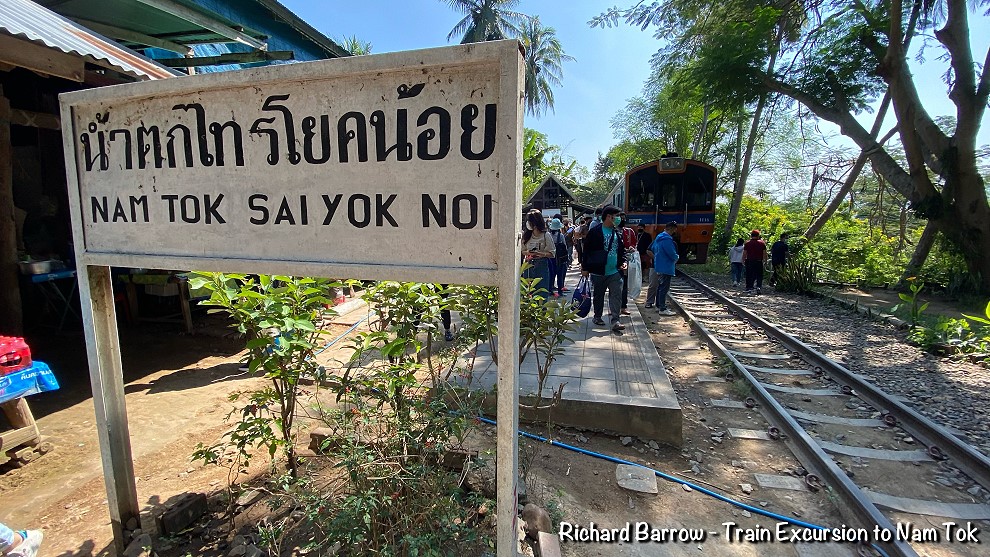 Our final destination on the train excursion to Kanchanaburi was Nam Tok Sai Yok Noi. This is the last station on the original line that went all the way to Burma. In the past, the line ran right past the waterfall. There is a steam locomotive here as a kind of a memorial. 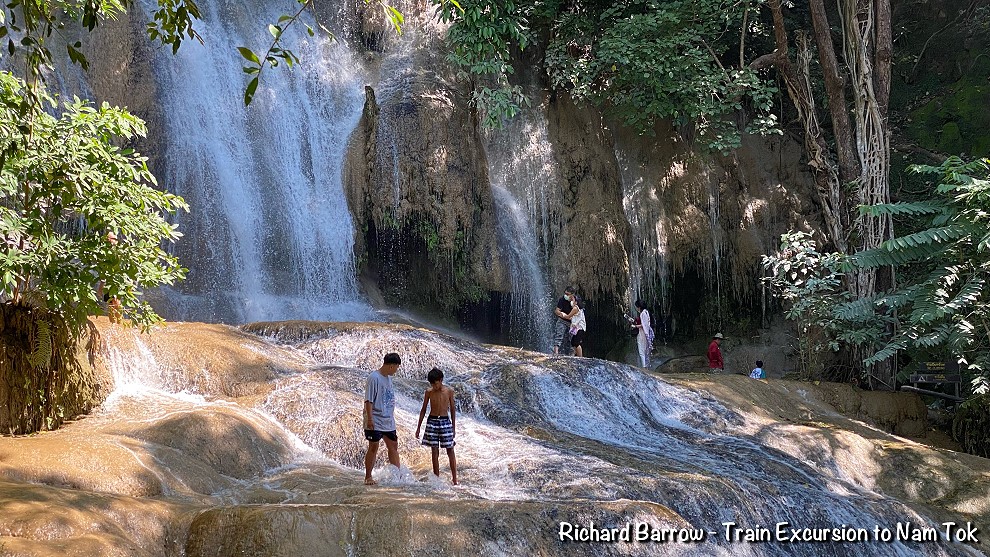 This is Sai Yok Noi Waterfall which is the highlight of the special train excursion to Kanchanaburi. We were supposed to have three hours here but the train arrived half an hour late. But it was still enough time to walk around and have something to eat. Some people swam as well. 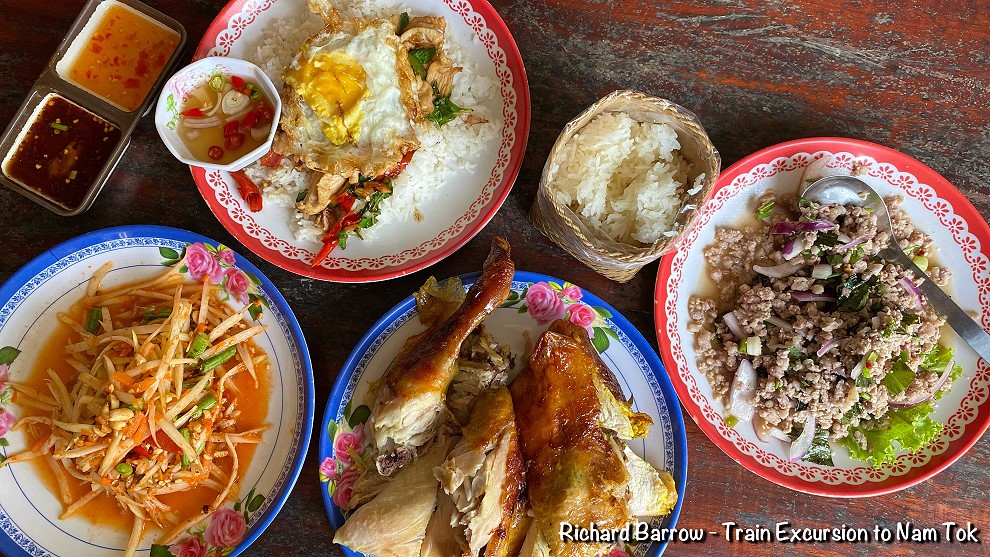 This was our lunch today at Sai Yok Noi Waterfall. There is plenty of choice for food here and so no need to bring your own. As it’s a national park, alcohol is not allowed. Nor are plastic or foam boxes. 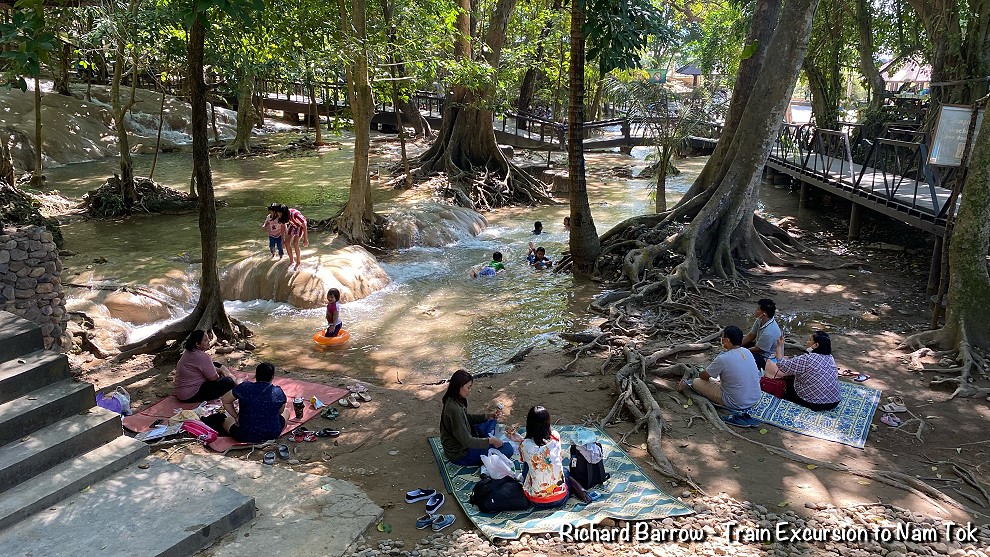 The time goes quite quickly. You can spend your time walking around or just sitting on mats eating a long picnic lunch. I love it here. 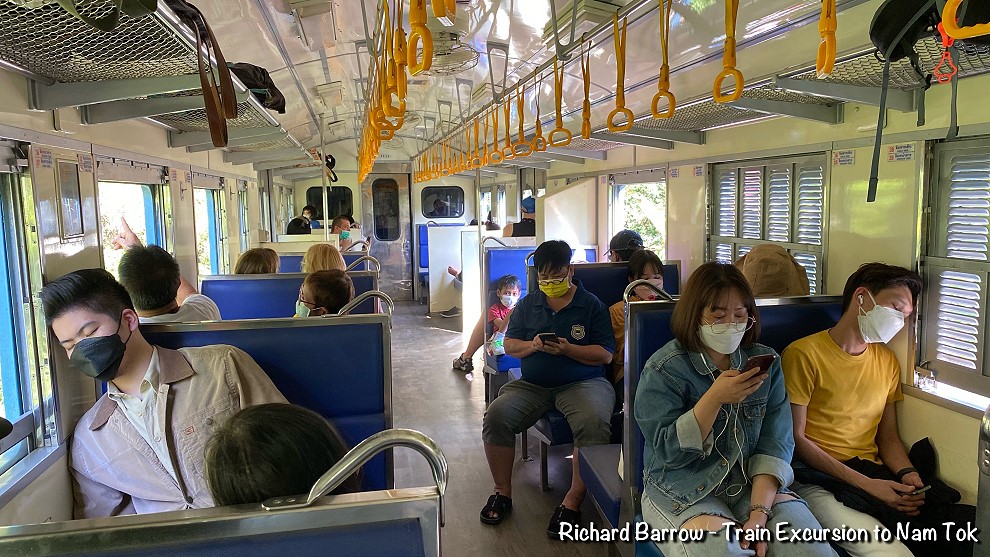 After nearly three hours at the waterfall, the guard blew the horn as a signal for us to head back to the train. The return journey to Bangkok will take at least five hours. If I remember right, there should be a brief stop in Kanchanaburi to buy snacks. 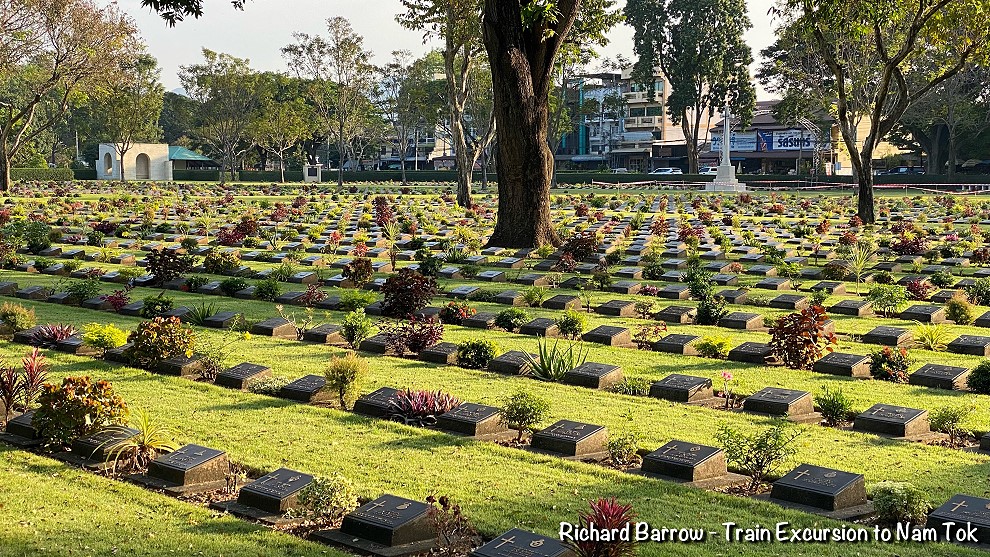 After crossing the bridge, the special excursion train stopped for 30 minutes at Kanchanaburi station. That was long enough for us to visit the nearby war cemetery to pay respects and to get some snacks before getting back on the train. 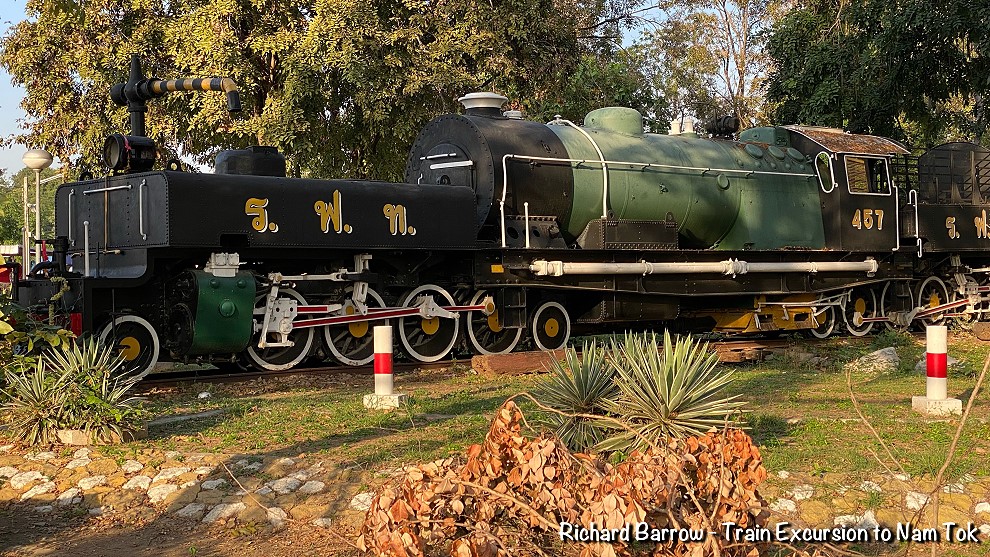 Quite a few of the major railway stations in Thailand seem to have steam locomotives. This one is at Kanchanaburi station. There are two more at the Bridge on the River Kwai. 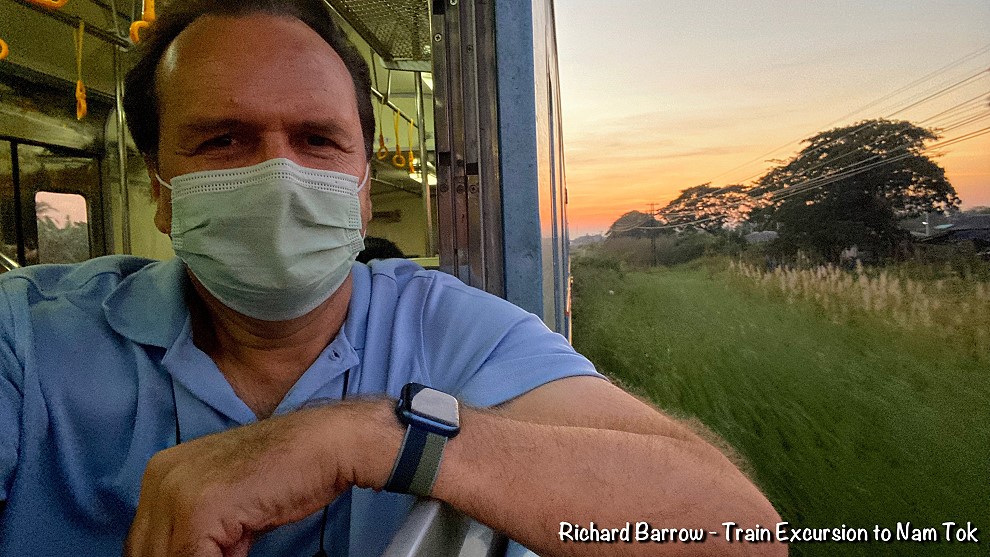 I love doing train travel in Thailand. Going 3rd Class is the best way. Although I’ve been on the train for most of today, I’m still looking forward to the steam train trip tomorrow (see here). Then in a couple of weeks, I’m taking the sleeper train to Chiang Mai. 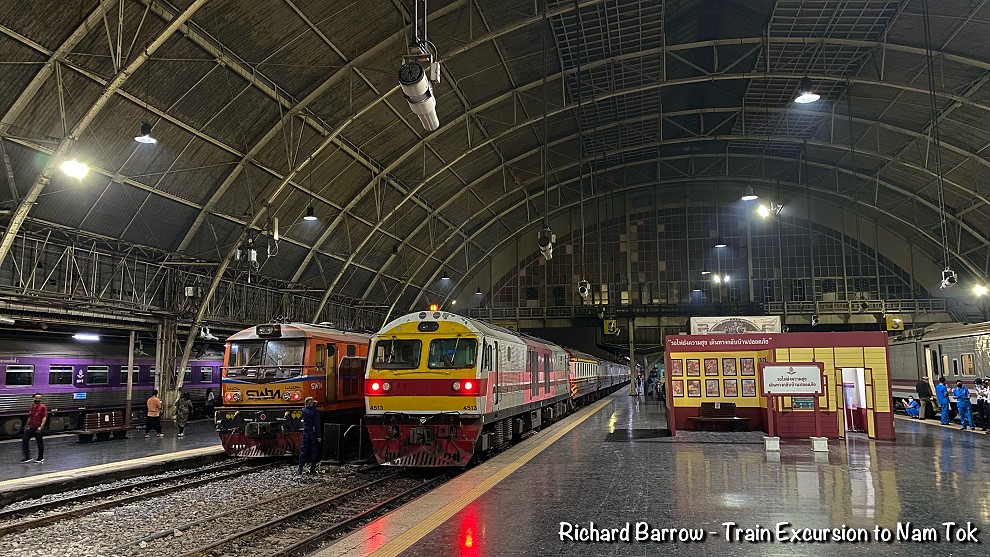 Finally back at Bangkok Railway Station after a great day on the Nam Tok special excursion train. The full day cost was only 120 Baht not including food. You can find out how to book this trip by visiting Excursion Train to Sai Yok Noi Waterfall. 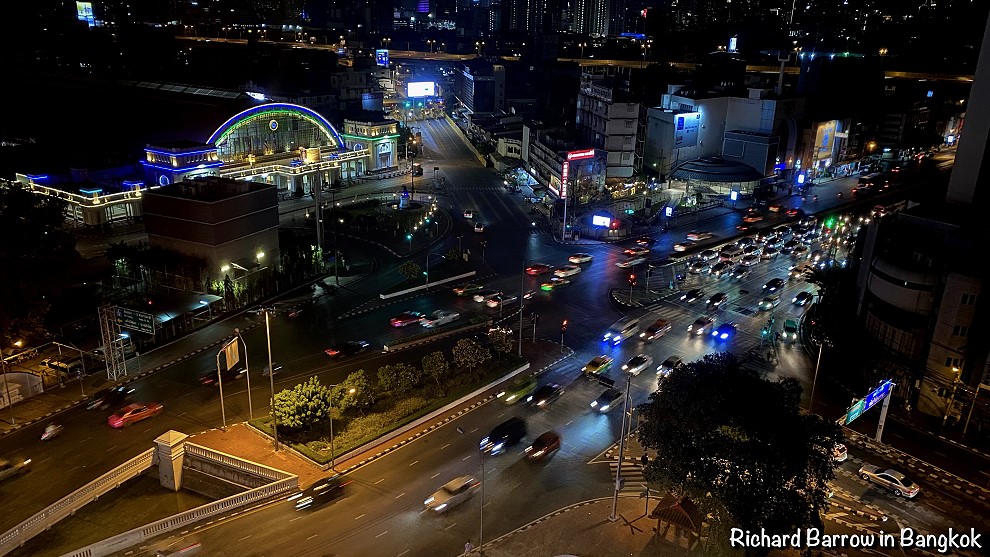 Tonight I’m staying at The Quarter Hualamphong again. On Agoda it was only 690 Baht. I like it as it’s convenient to leave my car here while I’m on train trips. I’m only staying one night but my car will be here two full days. I wish I had discovered this place a long time ago. 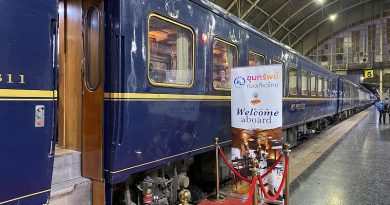 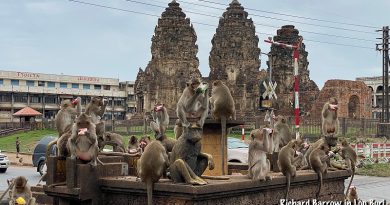 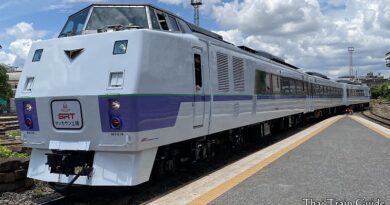 Everything you need to know about the Japanese KiHa-183 trains