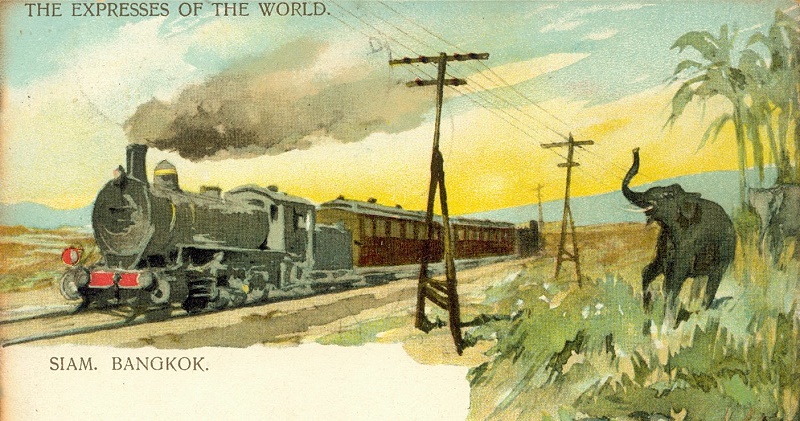 The following is an extract from Guide to Bangkok with Notes on Siam published by the Royal State Railways of Siam in 1932. This extract is from the last chapter, Notes on Siam, and is a situation update about railways in Siam at that time. It is taken from pages 316-320. Please note, I have changed place names to modern day spelling to make it easier to read and understand. It should also be noted that Songkhla at that time was called Singora. Notes about these changes can be found at the bottom of the text. When this guide book came out, the State Railway of Thailand was called the Royal State Railways of Siam. It was changed to be a state enterprise on 1st July 1951. Back in 1932, there were already 2,862 kms of tracks with another 322  kms under construction. Today there are now 4,044 kms of tracks with more lines already being built.

Railway construction in Siam did not begin until 1891. Two years later the first line, a private one, was opened connecting Paknam with Bangkok, a distance of 20 kilometres. Realising that railways are important for the development of the country, the Siamese Government made special financial arrangements for their construction and, within thirty years, the railways in Siam have grown from nothing to 3,184 kms. (B. E. 2472-A. D. 1929/1930), out of which more than 2,862 kms, have already been opened to traffic, while the remainder are under construction and survey.

Most of the railway lines in Siam are owned and operated by the State, for out of the total kilometerage given above only 106 kms, are owned by private capital. Even then they are subject to State Control in regard to public safety, etc.

The Royal State Railways of Siam is the biggest commercial undertaking in the Kingdom today with a capital of more than £18,000,000, and an annual turnover of approximately £1,900,000. The System is in continuous expansion and enjoys the admiration of and is very popular with the travelling public.

The main terminal and the headquarters of the Royal State Railways of Siam are in Bangkok from where the lines radiate to the Southern, Northern, North-Eastern and Eastern Provinces. 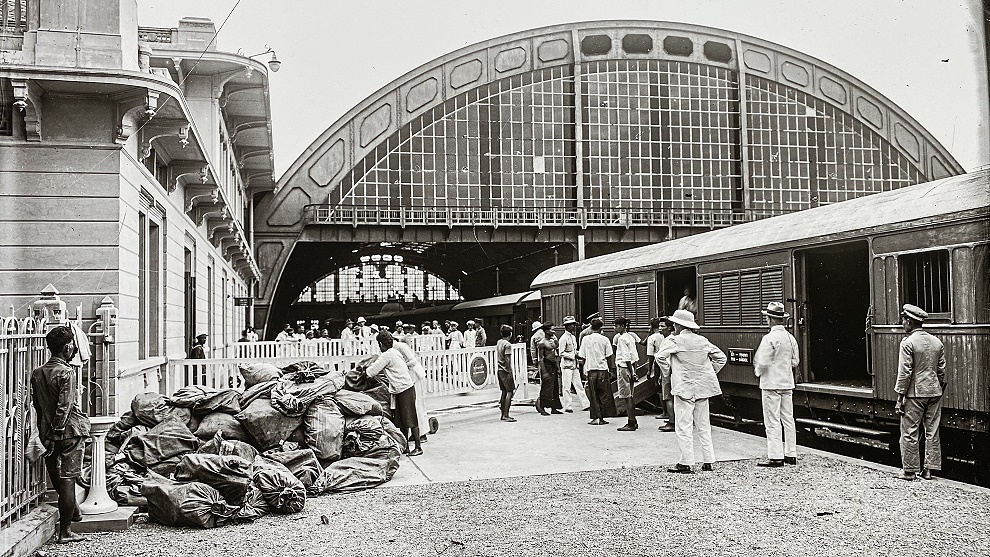 The total length of the SOUTHERN LINE is more than 1,300 kms. The main line, running straight from Bangkok to Padang Besar, the Frontier Station, covers a distance of 989 kms. At Tung Song Junction, 773.11 kms. from Bangkok, the line branches off to Kantang, a seaport on the west coast 93 kms. away, and a little farther down at Khao Chum Thong, kms. 797, there is another branch line 35 kms. long to Nakhon Si Thammarat. Hat Yai an important junction is farther south at 944 kms. From here the Pattani line of 215 kms. starts to Su-ngai Kolok. Singora (Songkhla), on the east coast is also connected with this junction by a branch line of about 30 kms. in length.

Express trains equipped with the most up-to-date day and night coaches, single and double berths compartments and restaurant cars, run twice a week between Bangkok and Penang. The Royal State Railways of Siam take much pride in these express services and do their utmost to make travelling between Penang and Bangkok pleasant and comfortable. At present, the journey which occupies only 26 hours appeals strongly to most travellers between Penang and Bangkok, especially to those who dread travelling by steamers during the monsoon season.

On the Southern Line the Royal State Railways maintain an excellent hotel at Hua Hin-on-Sea and five rest-houses at Petchaburi, Chumphon, Hat Yai, Thung Song, and Songkhla. Hua Hin is 229 kms. from Bangkok and is an incomparable seaside resort in the East. The hotel is kept up to the best standard desired by the most critical mind. In conjunction with the hotel, the Railways also maintain golf links which are also second to none East of Suez. Bangkok residents as well as those of the Federated Malay States frequent it all the year round.

Rest-houses are intended especially for travellers who are not in a hurry and wish to stop off at various places along the line. They are nicely kept up, clean and always provide good food. Tourists will find it convenient as well as pleasant to stop off a day or two and experience this mode of travelling. 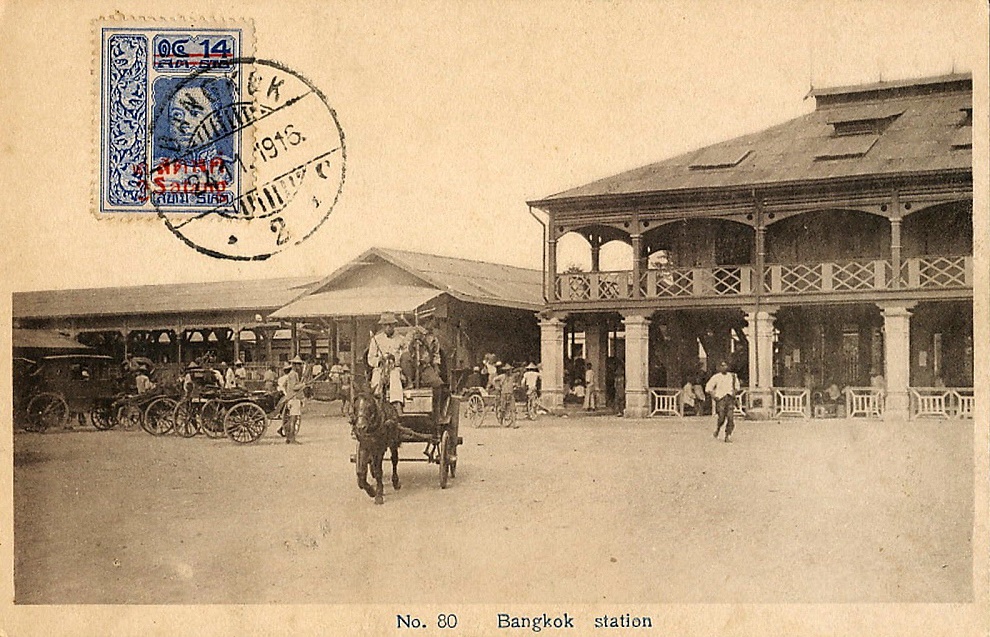 THE NORTHERN LINE of the Royal State Railways connects Bangkok with Chiang Mai. the capital of the North. The main stretch between the two cities covers some 751 kms. At Ban Dara junction 458 kms. from Bangkok, a line branches off to Sawankhalok , 28 kms., the ancient capital of Siam, famous for its historical relics and ruins of centuries ago.

There are express trains with excellent day and night coaches, single and double berths compartments and restaurant cars running between Bangkok and Chiang Mai. The journey occupies only 26 hours, and the timetable is so arranged that daytime is spent in the most interesting part of the country.

The scenery along the Northern Line is incomparable in its grandeur. The Khun Tan Tunnel, at kms. 683, is 1,361 metres long, and is considered to be one of the most important engineering works of the system.

Rest-houses are maintained by the Royal State Railways at Lampang and Chiang Mai. Good accommodation and excellent food can be obtained at both places. Many of the tourists visiting Chiang Mai and Lampang find it convenient to make their headquarters there.

Among places of interest along the Northern Line Ayutthaya, the former capital, Bang Pa-In, His Majesty’s summer residence, and Lop Buri, another ancient capital, must be mentioned. These places can be visited within a day from Bangkok. The Northern Line also serves as the most important means of transportation for the rich Maenam delta (Chao Phraya River) from where the most essential part of Siam’s commerce, rice, is derived.

THE NORTH-EASTERN LINE of the Royal State Railways runs from Bangkok to Ubon Ratchathani, passing through a mountainous and jungle clad part of the country. The scenery along this line is extremely interesting as the railway track is continuously winding in and out of the mountains. Between Bangkok and Khorat, 264 kms., a train is operated daily, and besides there are a considerable number of local and goods trains.

This line has now its terminus at Ubon Ratchathani, a distance of 575 kilometres from Bangkok. Ubon is a town situated near the French border and on the north-eastern plateau of Siam, rich and fertile.

At Khorat, 264 kms. from Bangkok, a line branches off to Khon Kaen, 187 kms. The line is opened to traffic up to Bua Yai, 81 kms, and the section between this place and Khon Kaen is under construction.

Khon Kaen is a town situated on the same plateau as Ubon and half way between Khorat and Vientiane or Wieng Chan of the French Laos. The country surrounding Khon Kaen is very rich and fertile.

A newly built Rest-house is situated near by the Railway Station of Khorat and is intended for travellers who have to break their journey at this place.

THE EASTERN LINE runs from Bangkok in an easterly direction to Aranyaprathet, 255 kms, on the Cambodian frontier, which for the present is the terminus of a first-class motor road to the world famous ruins of Angkor Wat, and via Phnom Penh, to Saigon, the Capital of French Indo-China. Later on, rail connection is contemplated and the trip from Penang or Singapore to Saigon by rail with a few days spent in Bangkok and the North of Siam will be one of the most interesting tours of the world.

The following spelling was changed from the original text to make it easier to read.