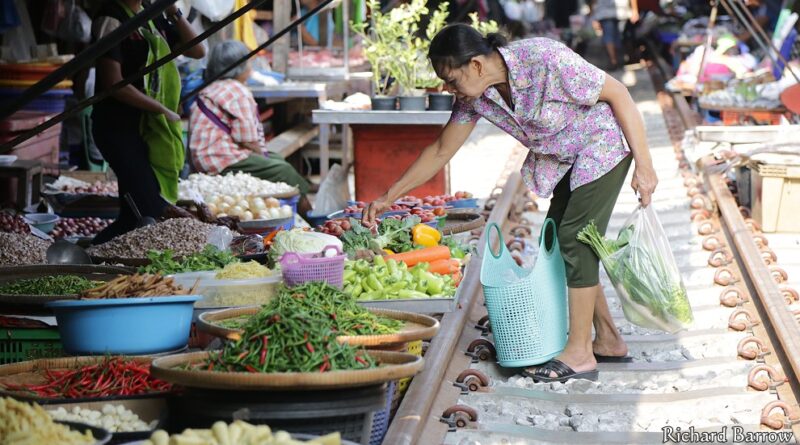 The Mae Klong Railway that goes from Bangkok to Samut Songkhram is an unusual line as it is not connected to the rest of the rail network in Thailand. This is because it started life at the start of the 20th Century as a private line to transport goods from the fishing ports in Samut Songkhram and Samut Sakhon to Bangkok. However, since the 1950’s, it was handed over to the State Railway of Thailand and became a passenger railway. The terminal station in Bangkok is Wongwian Yai.  The route these days is popular for tourists who want to visit the market on the railway tracks in Samut Songkhram.

Visit Day Trip to the Market on the Railway Tracks for a photo blog of a recent trip along this line. 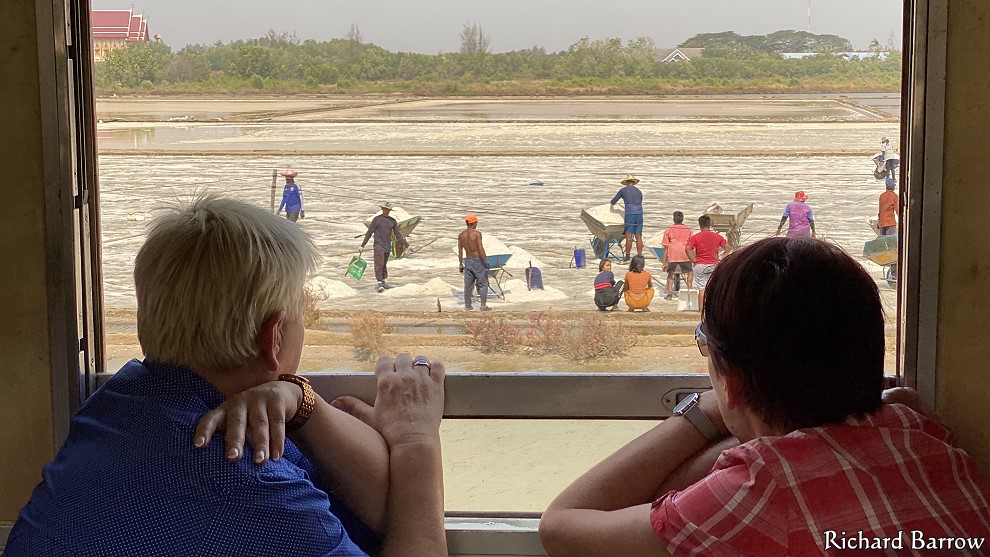 MAP OF THE MAEKLONG RAILWAY

There are 18 stations between Wongwian Yai and Mahachai and 15 stations between Ban Laem and Mae Klong. Each stretch takes about one hour. Although it will only take you five minutes to take a boat across the river, the entire journey will take much longer as the arrival and departure times in Samut Sakhon don’t match up. This is because the first stretch is more popular and has 17 train pairs a day and the second stretch on the other side of the river only has four train pairs a day. 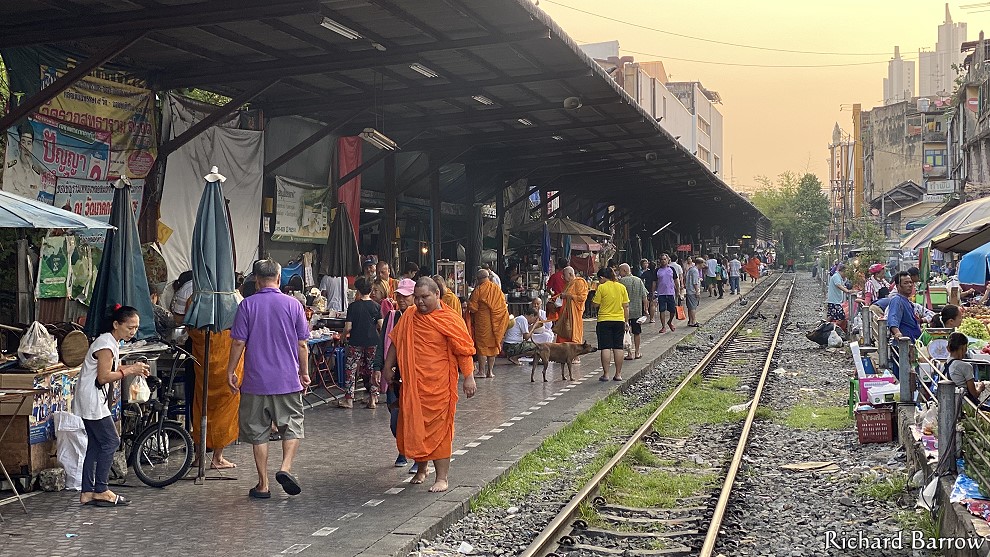 PART ONE: BANGKOK TO SAMUT SAKHON

The price of the ticket from Wongwian Yai station in Bangkok (see map) to Mahachai station in Samut Sakhon is 10 Baht for 2nd Class (fan). The best morning train for the connection in Samut Sakhon is at 8:35 a.m. This gets in at 9:28 a.m. and you then have about half an hour to take the ferry boat to the other side of the river to catch the 10:10 a.m. train to Samut Songkhram. However, I would advise you to take the 7:40 a.m. train from Bangkok which gives you an hour and a half to explore the market in Samut Sakhon and then cross the river at your leisure to catch the 10:10 a.m. train to Mae Klong in Samut Songkhram. The ticket to cross the river is 3 Baht.

TIMETABLE FOR THE MAHACHAI RAILWAY

All times are subject to change. Last updated in June 2022. Please note, the nickname for Samut Sakhon city is Mahachai.

These are the departure and arrival times for trains going from Wongwian Yai (Bangkok) to Mahachai (Samut Sakhon).

These are the departure and arrival times for trains going from Mahachai (Samut Sakhon) to Wongwian Yai (Bangkok). 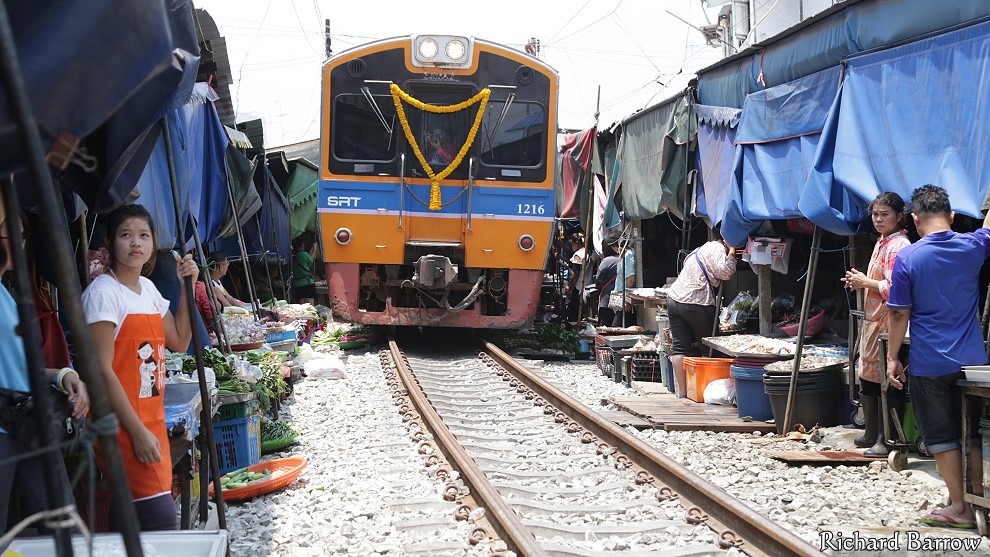 The price of the ticket from Ban Laem Station in Samut Sakhon to Maeklong Station in Samut Songkhram is 10 Baht for 2nd Class (fan). If you caught the 8:35 a.m. train from Wongwian Yai, you should arrive in Samut Songkhram at 11:10 a.m. If you then stay at the station to watch the 11:30 a.m. train depart through the market, you will then have to wait for four hours until the next and last train back to Bangkok departs at 3:30 p.m. You can either take a minivan or bus back to Bangkok, which is actually quicker, or do a side trip to Amphawa Floating Market. And then catch a minivan from there back to Bangkok. The floating market is only open Friday to Sunday and only during the late afternoon.

TIMETABLE FOR THE MAE KLONG RAILWAY

All times are subject to change. Last updated in June 2022. Please note, the nickname for Samut Songkhram city is Maeklong.

These are the departure and arrival times for trains going from Ban Laem (Samut Sakhon) to Maeklong (Samut Songkhram).

These are the departure and arrival times for trains going from Maeklong (Samut Songkhram) to Ban Laem (Samut Sakhon).

The highlight of the Maeklong Railway is the famous market on the train tracks in Samut Songkhram. In Thai, this is called Talad Rom Hup (ตลาดร่มหุบ) or Folding Umbrella Market. This refers to the awnings that have to be pulled back every time a train passes. Fortunately, there are only eight trains a day. In recent years, this market has been discovered by tour groups and you can often find hundreds of tourists here in the morning all trying to take the same picture. I first went here by train back in 2006 when it wasn’t as popular with foreigners. If you go, please be careful as it can be dangerous. People have been hurt. The trains pass through the market at 6:20am, 8:30am, 9:00am, 11:10am, 11:30am, 2:30pm, 3:30pm and 5:40pm. All times on this page are subject to change. 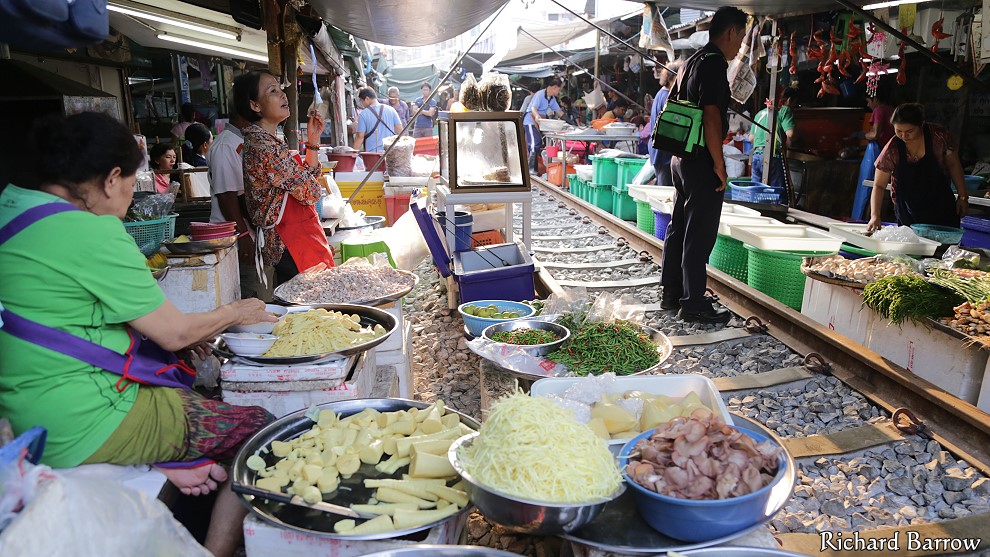 The Maeklong Railway was built in two separate stages. The Tachin Railway Ltd, founded in 1901 with a concession from the crown of Thailand to construct a line to Samut Sakhon from Bangkok, built the 33 kilometer Mahachai Line; it opened in 1904 with eight stations. A year later, The Maeklong Railway Company opened the 34 kilometer Ban Laem Line. The lines merged in 1907 to form the Maeklong Railway Ltd. It was originally opened as a goods line, transporting produce from the fishing ports of Samut Sakhon and Samut Songkram to the Bangkok markets.The Thai military gained control of the railway in 1942, during World War II, and the line was nationalised by the Thai Government in 1946. The line was operated by the State Railway of Thailand (SRT) from 1952 and was fully merged into the SRT in 1955. In 1961 the line’s original terminus at Khlong San was closed and replaced with a bus stop, to ease traffic congestion in Bangkok. Wongwian Yai became the new terminus. [Source: Wikipedia] 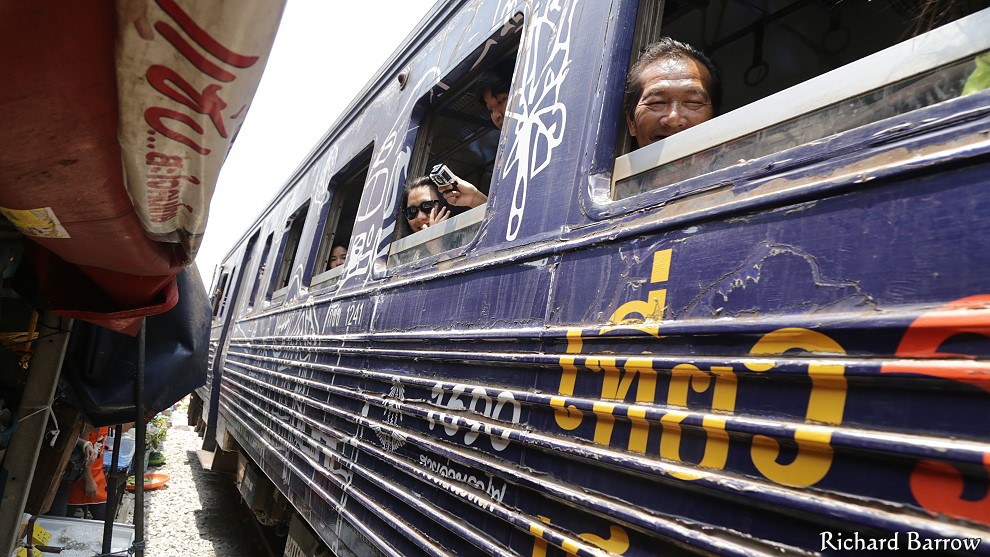 Visit Day Trip to the Market on the Railway Tracks for a photo blog of a recent trip along this line.